Optical probe is the main element of any near-field optical microscope. The design of such probe allows to localize electromagnetic field in a region of space with size less than wavelength of applied radiation.

There are two methods of localization of electromagnetic field: aperture and apertureless.

1) To illuminate the object and / or to detect the signal the aperture is used, whose size can be substantially smaller than the wavelength of light (d <<λ). Usually the probes based on metal coated optical fibers are used with an aperture at the probe tip. In this case the aperture should be located at a distance which is smaller than the wavelength (h <<λ) above the surface.

2) To radiation localize used by probe tip, approached to the illuminated surface at a distance less than the wavelength. In this mode, the tip scatters (turns to far-field light) the near-field, localized near sample surface.

In the most common case, the probe for aperture near-field microscopy is metal coated optical fiber with truncated cone on the end and aperture on top of the cone. Aperture size and coating material varies depending on the technique and the required resolution. Typically, the aperture diameter is in the range of 50-100 nm, and coating is done with aluminum or silver.

Exist for some basic techniques of lighting and / or signal detection. 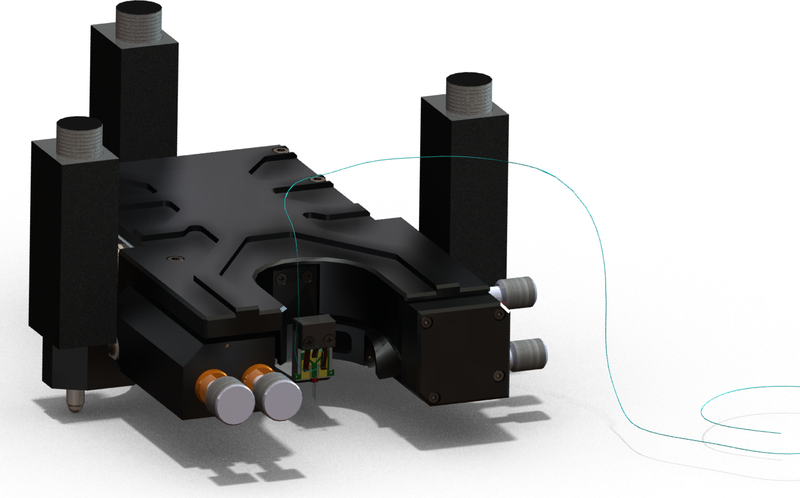 Regardless of optical probe can collect the signal only at one point. To construct a raster image requires a system of moving the probe relative to surface in XY or XYZ coordinates (raster scanning system).

For scanning systems use scanners, similar to scanners tunneling and atomic force microscopes. That is scanners with piezo-tube or plane-parallel scanners.

At Certus NSOM scanning head Certus and XY-scanning stage Ratis allows you to use external large aperture objectives, illuminators, microscopes condensers, etc. to illuminate the work area, monitor the sample and the probe position, to take stock of radiation in the point of contact of the probe and the sample. Which allows the use of all basic techniques of near-field microscopy.

To register change distance between probe and sample surface (Z) use same methods as in atomic force microscopy. The most widely used method "shear-force" and registration of probe position by deflectometer.

Our company has developed three versions of the microscope Certus NSOM:

Microscope Certus NSOM S allows the use of near-field optical microscopy techniques based on light reflection from the surface or probes. XYZ probe scanning with head scanner.

For complexes Centaur (HR) based on SPM Certus NSOM as an additional option implemented techniques of near-field optical microscopy with aperture. Apertureless techniques implemented in these complexes by default.